No Sleep till Brooklyn, Baltimore

This weave isn't tumbling anywhere. It's firmly secured in packaging with tags and prices and accompanying accessories. These wigs and extensions have been carefully displayed and one day be purchased and worn with care. 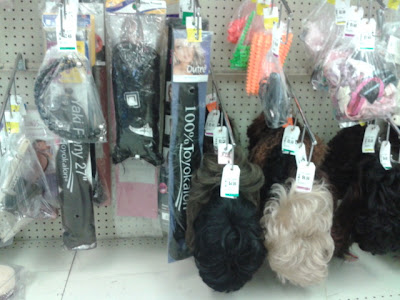 Weave can get pricey. Most means of beautification are costly, time consuming, and require reoccurring attention. Such 'hobbies' are associated with women, and thus they aren't as important to discuss; they are "inferior"1. Before this becomes a discussion of gendered expectations of success with physical appearance, let me say the financial burden places on women- identified people is much higher than for men. It isn't fair. This may have been the greatest thrift store I've been to in Maryland, but the extensive hair selection made it the greatest I've been to in the few states in the United States (shout out to Savers). Hell yeah- people who need wigs or weave get a chance to save some money. Times are tough and fashion sense isn't getting any cheaper.
Fun facts about Brooklyn:
Brooklyn isn't just a place in New York.
Finally, there is the aforementioned neighborhood Brooklyn in Baltimore, and there is Brooklyn Park in Anne Arundel county. Way to rack up the Brooklyns Maryland. Let's jump into the stats: Brooklyn/ Curtis Bay, when compared to Baltimore City, has higher percentages of white and Hispanic residents, "some other races", and "two or more races"2. Some other races...two or more races...one day this will be expanded without it being considered superfluous fact.
Income, proficiency levels, and school absenteeism for elementary through high school is comparable. An interesting statistical difference as listed in the 2011 Neighborhood Health Profile of Brooklyn/ Curtis Bay/ Hawkins Pt. is that of adult educational attainment. Brooklyn residents beat out the average percentage of Baltimore City residents with a high school diploma by 20% (75% versus 52%), but Baltimore City residents win with college diplomas by 20% (5% versus 25%). This has to be because of the presence of so many universities and colleges in Baltimore city, as well as the number of transplants who graduate from these universities and colleges and stay in Baltimore.
Anyone following current events in Baltimore these days knows that the number of shootings and police activity has been off the charts recently. Unfortunately the rates of fatal and non-fatal shootings in Brooklyn are higher than the average of Bmore City (as are rates of domestic violence). This is not to say that the number of shootings in Brooklyn has increased in tandem recently. My stats are from 2011 averages.
This information is from wikipedia.org (I'm sorry, college professors): because of "general neglect from the city of Baltimore" and its proximity to Cherry Hill, Brooklyn struggles with crime and drug activity. There is a question about the source for the quote about Baltimore neglect; I can't say if it's true or not. I only personally know the 20-somethings go to Brooklyn for the thrift stores and they say "it isn't safe, but where in Baltimore is?". Like Station North, there are plans for gentrification in Brooklyn but this hasn't been moving forward with the same speed. That's not uncommon- communities on the outskirts of a city are never tended to as quickly (see: parishes outside of New Orleans). There is some truth to the wikipedia facts based on this website: http://www.crimebaltimore.com/ It gives a good breakdown- very thorough.
But in the end, only the people who live there can say anything with certainty and truth. I am not tech saavy enough to reformat to get the video to fit. You should follow the link here and above to see it. Neighborhoods don't need false advertising from weave-stalkers. Let them speak for themselves.
To tie it back to the beginning: in the video a man says "There aren't too many outlets for little girls". As cities take stock of what places to "gentrify" (because it is a harsh and much-debated inevitability), leaders need to remember the needs of the children and young adults come first. Methods of physical adornment and ornamentation are important in their own right, but it can't be the only outlet for young women.

Do you want your travels loosely documented, or your neighborhood featured? Email me at tumblingweavenation@gmail.com
Include the neighborhood or the cross streets, if possible!

Thank you to the Beastie Boys for quotable song titles
Thank you to Baltimore. Every day
Posted by Dog Days Are Over at 8:07 AM