Don't Sleep on the Subway, Darlin', The Night is Long

Just like Petula Clark said in "Don't Sleep on the Subway", don't sleep on the subway. And that was sage advice because if I had been asleep on the subway, I would have missed this piece of weave on the sidewalk in front of the Fern Rock Transportation Center in Philadelphia, PA. Located at 900 Nedro Avenue & 10th Street, there is no ticket counter, no bike racks, and of the 639 parking spaces, generally 0 are available by early afternoon. It is dirty, cramped,and surrounded by a residential area and a police station. Between looking at my watch while waiting for friends to pick me up and reading The Girl Who Played with Fire by Stieg Larson, I looked down at my feet, demurely crossed at the ankle and clad in my spiffy new Sperry top-siders, and noticed this piece of weave: 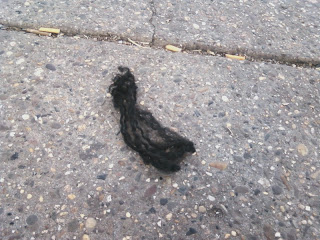 Fern Rock is a neighborhood in the upper upper parts of North Philadelphia. Around Fern Rock on all sides are Olney to the east, Ogontz to the west, Logan to south, and East Oak Lane to the north. It is bound on all sides by other equally small and not well known little neighborhoods. In all honesty, the purpose of this post is to feed both my ego and love for the mundane, as well as bring some much needed publicity to these areas. But I digress, Fern Rock demands my utmost attention. The area is a mix of 1920's style row homes, a few high rise apartment buildings, some older twins and single homes, along with various commercial strips along Broad Street, Olney Avenue in and around Broad Street, and Old York Road. The area is predominantly African American, at probably about 95% of the population, with the remaining 5% made up of residents who have been categorized as white, hispanic, asian, and the ever- baffling "other". The average income is about $35,488; the average number of single-parent (specifically single-mother) is about 23.2% of all households-- which is slightly higher than the average for Philadelphia overall at 14.9% of all households.
At this point you may still be thinking, "Fern Rock. Feernnn Rooockk? Do I know this place? Why should I care about Fern Rock?" Well, for starters, you skeptical readers out there, Fern Rock is home to The Pennsylvania College of Optometry. Try getting glasses or that eye exam you remember about every six or seven years without optometrists. If that nugget of knowledge still isn't helping you place how you may know the area, perhaps you may remember the highly publicized and much-discussed double homicide that took place in September of 2006. You can read more about it here if you are interest. I do recommend looking into the full details of the event, but I am not quite bold enough at this time to throw information at people who are not ready to hear it. I hope that intentional ambiguity caught your attention.

Not every city is perfect-- in fact, many cities are damn near awful from the outside. But even Atom and His Package reminds listeners in the song "Philadelphia" that, you know, in Philadelphia you have to "get to know us" before you judge-- this line comes after: "this is the city of brotherly love and crime/ and we only bombed our own city once, one time". Well, I guess you can't win 'em all.

Until next time, faithful readers.


Thank you to Sam and Rachel for making me wait at the Fern Rock stop for a bit, giving me enough time to find this.

References
http://www.city-data.com/neighborhood/Fern-Rock-Philadelphia-PA.html
Posted by Dog Days Are Over at 11:30 AM No comments:

In Baltimore, You'll Find What You've Been Waiting For

The summer time is finally here. The brutal heat and humidity, characteristics not unknown to those who live anywhere between New York City and Florida, leaves the air heavy with moisture you cannot avoid; your armpits wet like a woolen sweater caught in a rainstorm. In Baltimore, it means running from your crumbling house that was built well before air conditioning or closets large enough to fit a hanger. Out in the streets, people of all races, ages, genders, and the like search for reprieve in shaded parks, free museums, and out door markets- which is exactly where our newest treasure was found. 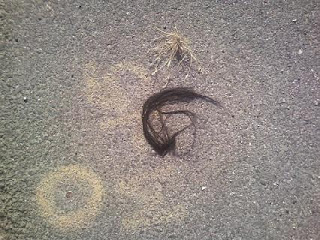 Found on Baltimore Avenue by Hollins Market, this extension is clear and fresh as the early morning haze on the pavement in the summer. Before we begin, Baltimore has 6 public markets that were established between the 18th and 19th centuries. Baltimore may be famous for more than lots of crime, dilapidated row homes, and the inner harbor,but these markets should be at the forefront of every local and tourists mind when grasping for what makes Baltimore a worthwhile city. Lexington Market is by far the oldest and the largest and reasonably stationed under a bridge- like all great things in the greatest city in America, it is a little weird and oddly located.
But Hollins Market, a block-long, 30,000-square foot facility, has a two-story front built in 1877. Located in Baltimore's old Lithuanian section, Hollins Market is the only one to still retain its second floor. Up until the late 1950s, vendors along three blocks of Hollins Street sold goods outside the market. This market was the last to close its outside street stalls. [For those are interested, it is open from 7 am to 6pm on South Arlington Avenue.
The Hollins Market neighborhood itself is about 14,764 people per square mile; the average household income is a little below the city average ($38,772) at $35,014. The majority of people who live in Hollins Market Neighborhood have a high school diploma at around 38% of residents, with second highest coming in with a bachelor degree at around 10% of residents. Racially, it is primarily black, followed by white, then hispanic,and then asain, and then- according to the internet- "other". Whatever other means.
And there, among the diversity and the butchers and bakers and candlestick makers peddling their wares, was this woven treat.

If you're caught in the summer heat of Baltimore, a hidden treasure or adventure is never from your front door- or bus stop.

Thanks to Mo-mo for this picture and location.

Thanks to The Extra Glenns for "Baltimore".
Posted by Dog Days Are Over at 10:21 AM No comments:

I Fell In Love in the Library, Once Upon a Time

The end of the semester at any college or university, I'm guessing, means as many students as possible are trying to cram their bodies and all of their stuff into any open space possible. At Goucher College, computers in the information commons are claimed for days on end; snacks, empty to-go containers, and piles of books become makeshift barricades. We stop looking at each other, and only see how few assignments others have in comparison. Resent is the sugar in our coffee with two shots of expresso; envy directed at those who have just finished their last papers of the semester is cherry on the massive sundae we order from the Gopher Hole to fill the emptiness.
What I didn't realize the end of semester meant constant self-grooming in public spaces. 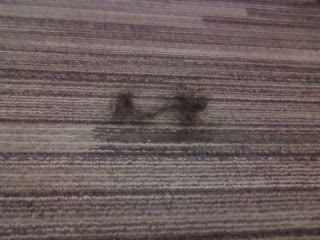 Yes, readers, there is more weave in the Goucher College library. In almost exactly the same location as before. It is almost too uncanny to be a coincidence. Nestled in almost to the point of blending in with the mottled rug, more weave has found a home in the absence of a head on which to dwell. It will sit there sadly until housekeeping comes in the early hours of tomorrow morning to vacuum it up. And more weave will be discarded without a second thought.
Riddle me this Goucher students: what exactly has been happening in our library?
Posted by Dog Days Are Over at 5:28 PM No comments: