As Redman Said, "Once Upon a Time in Jersey, Yo!"

New Jersey- Home to the most shopping malls...the most diners...the Miss. American pageant...and the first Native American reservation.
Needless to say, Jersey is the epitome class and high culture. Next time someone tries to slander this blissful state, say with force and conviction, "Shut your mouth! You know who's from Jersey? Aaron Burr. And that guy shot Alexander Hamilton." Legit, am I right?

And high in the northern reaches of New Jersey lies New Brunswick, a quaint little college town that houses Rutgers Univeristy and it's thousands of college-age students. Today while going about her business, my good friend, Genna, found this treasure at the cross streets of College Ave. and Stone St. in New Brunswick: 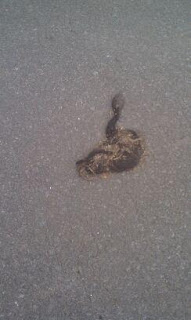 At first glance, this looks like a creature left in the middle of the road to die a death befit for an existentialist novella. However it is not a rat that has crawled from the well- maintained sewers of New Brunswick, but a weave left for the taking-- hopefully the taking of the eyes. And as an experiment, I will now seamlessly move into an analysis of the area where this homeless weave was found. I am going to delve a little more seriously into the demographics of the area, as the original thought behind this blog is to both enjoy these glimpses into the secret life of weaves, but also to look at the social structures in which they exist.
New Brunswick, located in Middlesex County, hosts 48,573 people with 9,293.5 people per square mile. The racial makeup of the city is 48.79% white, 39.01% Latino, 23.03% African American, 0.46% Native American, 5.32% Asian, 0.08% Pacific Islander, and 18.08% from a host of other races. The remaining 4.24% identify as two or more races. Many of the residents who identify as Latino come from Puerto Rico, Mexico, Guatemala, Honduras, the Dominican Republic, and Ecuador.
The median household income in New Brunswick is $36,080, with an average of $13,053 and a per capita income of $14,308. The following is a simple breakdown of jobs: 17,563 residents have white collar jobs; 21,6617 residents have blue collar jobs; 23,832 are employed; and 2,820 are unemployed. Only 62.6% of residents have attained a high school degree or higher.
Within that population of almost 50,000 people, there is an estimated 4,555 crimes a year that range from violent crime to petty larceny. New Brunswick isn't exactly a gated community.

And somewhere, lost in all of that turmoil, is that stranded clump of synthetic cosmetic accoutrement.

Special Thanks to Genna Ayres and Noam Orr for sharing this picture.
Thank you to Redman for "Jersey Yo"
Posted by Dog Days Are Over at 2:30 PM No comments:

I was beginning to lose faith. As I received text message after text message informing me that weave had been spotted around the Baltimore area, I had become despondent. Why were all of these lucky souls finding the weave, but they were without a camera and I was left with nothing? Complaints that this blog was a flop began to pile; my confidence began to dwindle. Just as I was beginning to lose sight of the original idea of this project, I was reminded that hope springs eternal.

Yes, dear readers: weave was spotted in the library of Goucher College. 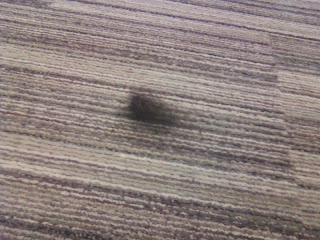 For those who do not know, Goucher is a small liberal arts school in the vibrant suburb of Towson, Maryland. Founded in 1885, it is home to approximately 1,477 students, with a gender ratio of 70% female to 30% male. The library, which was relocated to the recently completed Athenaeum last year, is full of harsh lighting and glass from wall to wall. To say this building is the height of chic architecture and sustainable engineering...well, that would be giving into the charade. Both the greater Ath. and the library look new and impressive, but only one is true. Despite this lackluster review, discarded weave is an unexpected visitor here. Despite any shortcomings, this building is supposed to look like a student prison in the future that may be featured in a Sci-Fi channel original movie-- and I am hesistant to say whether tumbling weave was intended to decorate the muted rugs.

Enjoy this brief posting. With eyes fixed firmly on the ground in search of weave, enjoy the sun.

Remember: if you spot weave, please take a picture and send it my way.


Special thanks to Jenna Gross for sharing this picture.
Thank you to Green Day for "At the Library"
Posted by Dog Days Are Over at 10:51 AM No comments:

Weave is everywhere. Without fail, you will see it in every city. One hopes to see such a thing carefully glued, sewn, or woven into a woman's (or man's) hair, adding color or volume or flair. But pieces get left behind. Strands can be found strewn about in bizarre clumps, some of which resemble rodents when quickly glanced at. Initially, little clusters of real or synthetic hair seen out of context of a human head is unsettling. Why is it there? How did it lose it's grasp on the head from which it came? Are you sure that's just weave? Such finds are, as you read, nesting in cities all over the country- maybe all over the world. Rolling along, battered by rain and wind and mud, getting caught in weeds or fences. Trapped in hedges and undergrowth, such pieces are forgotten and left to great unknown.
Here are two pictures of weave left behind: the very beginning of a look into weave nation. 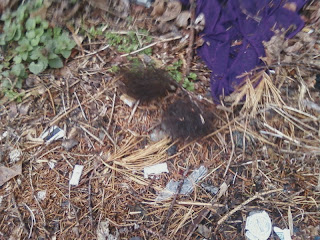 This image was taken on my high- tech flip cell phone. The camera is obviously highly prized in this model, offering a crisp image of weave caught in some weeds with trash. These little puffs were lost and left in the rain. I snapped a picture in the early morning of Saturday April 2nd in Baltimore, Maryland. Left in the front yard of a house on the 37 hundred block of Greenmount Ave. in the city, do the owners even know it's there? And just one block away there was another piece waiting to be noticed: 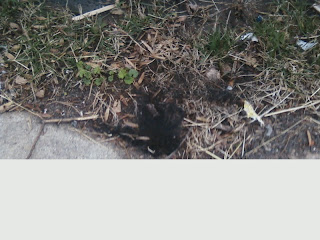 Found in the 38 hundred block of Greenmount Ave. in the epic city of Baltimore, Maryland, this piece shows more of the braiding that is common in weave.

Reader, I hope this brief post and the bad pictures helps to keep weave in mind. If you find pieces, take a picture and note the location. Share your thoughts on weave and what it means to a city.
Posted by Dog Days Are Over at 10:29 PM No comments: