It's Been a While, But We're Back with Style.

Readers, it's been a while. I've missed you. Weave has not been in the forefront of my thinking recently, but I look for it everywhere I go. I even found some on the island off the coast of New Hampshire (I think). But let's ease back in with a city I am beginning to get to know better. San Francisco officially became a city in 1826, but before it was established it was a site that positively glowed with ideals of success and a better life.
For quite a bit of time, Spain, Russia, and England were all vying for power and seeking domination on the Pacific Coast- Spain won. Laurels crown the names of Bucareli the viceroy of new spain, Anze the explorer and colonist, and Serra the president of the missions. A letter sent in 1774 from Bucareli to Serra marks the official beginning of the founding of San Francisco. Thus starts a long list of boat rides, surveys, arrivals, and departures. And all of that is how we now find ourselves here: 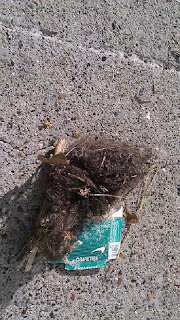 This weave has caught the sun, waiting for a lurid voyeur to come take a picture. It's almost as though it had been delicately placed on the Newport box just for you guys.

Here's a breakdown of the San Francisco:
The city is small, full of hills, beautiful at times, and way too expensive for an east coast dweller living south of New York and north of D.C. The city is small, and because of the size the demographics and statistics generally overlap between the county and the city. All I know about the county is that it hosts the only real pancake house in a suburb called Millbrae. I recommend their blueberry pancakes.
The city hosts somewhere between 776,000 and 808,000 people, and that is split about almost even between male and female (though it sports a few more men). The largest age groups span from 25 to 54. The majority of city dwellers have an income that falls between $50,000 to $74,999. Like I said, that city is expensive. In terms of race, whites are coming in the lead and are followed by Asian, Hispanic/Latino, African American, the mysterious "other", American Indian, and then Pacific Islander.
The website neighborhoodscout.com rates cities and compares how safe they are in contrast to other cities in the United States. Thanks to this site, I know that my chance of becoming a victim of a violent crime in San Francisco is 1 in 118. S.F. safer than only 9% of other U.S. cities. But don't worry tourists, the rate of property crime is much higher, with about 37,039 property crimes compared to 6,808 violent crimes a year.
But numbers and stats are boring to read as much as they are boring to research. San Francisco is full of wildly diverse neighborhoods, and you know exactly when you've left one and entered another. Is this a sign of age, race, ethnic, or religious segregation based on streets? Maybe, but it also gives each space a unique identity.
Occupying is big these days. Let's talk about that. The Occupy SF movement isn't just a group of kids in front of the Ferry Building at Justin Herman Plaza and hosting drummers and trolley car shaped tents, there are outposts in front of Wells Fargo locations around the city. That city effing hates Wells Fargo.
In the 1960s, San Francisco (and Berkley and Oakland) were rife with social justice movements. This city is no stranger to a diverse population with a wide range of stories about oppression and violence.
If you're a little nervous about the occupy groups, the police just broke down the settlement early this morning. No need to worry anymore.
Good thing NoFX got there before that all went down: http://www.punknews.org/article/45260

San Francisco isn't all sunshine and beautiful gardens, the city is struggling financially. The cost of transportation, housing, amusement, and everything else is going up. I'd be more careful about shedding weave if I live in California these days; every penny counts.


Sources
http://www.sfmuseum.org/hist6/founding.html
http://www6.sfgov.org/index.aspx?page=166
http://profiles.nationalrelocation.com/California/San%20Francisco/
Thanks to Alvin and the Chipmunks for the title.
Posted by Dog Days Are Over at 7:43 AM No comments: