The time has come to talk of any things- actually, we're just here to talk about weave. Since heading to this island, I have realized that lacking diversity of any kind generally means there is going to be a lack of weave. It may be a generalization, but it could very well be the truth. Since I have chosen to work for a handful of months in the whitest place since 'Stuff White People Like', I depend on whoever feels inclined to send me pictures they awkwardly took of something on the ground. Today, I can thank Jane for helping me out! 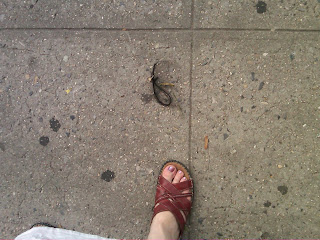 The weave is waiting in your path, guiding you through the wilds of urban living. 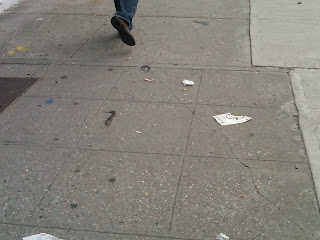 If I were ever to write a children's book, I use this photo. It would be a modern telling of 'Hansel and Gretel'. Instead of dropping crumbs, they will drop scraps of weave to help bring them home. The twist will be: there is so much weave on the streets of New York that they will follow the wrong pieces home. Boom.
These pieces were found at the corner of 7th Ave. and 13th St. in Park Slope. Thanks to the magic of the internet (and my free time in the office), I found a picture of the very same corner on Google earth.

If you continue to read this blog, you will never have to go on vacation again. My updates are like windows into magical new worlds.
Let me set the stage: Park Slope, Brooklyn. Now this is a place that should be featured on the blog 'Stuff White People Like'. That place is crawling with same-sex couples pushing strollers, small dogs being held in their owners' arms during walks, and well-groomed window boxes full of bright flowers on streets shaded by real trees. Incidentally, this is not something I have made up. I highly recommend you check out this article before you do anything else: I have a cited source, you MLA freaks.
I could easily expand into a loquacious, and poorly written, novella about the Slope Rage meme that is spreading like Hand, Foot, and Mouth disease through a daycare, but we have demographics to discuss. The rumor mill is churning out an endless supply of hateraid about Park Slope, but what is it actually like there?
Well, let the internet tell you. Park Slope is a neighborhood in western Brooklyn, New York City's most populous borough. Park Slope is roughly bounded by Prospect Park West to the east, Fourth Avenue to the west, Flatbush Avenue to the north, and 15th Street to the south, though other definitions are sometimes offered.But honestly, I am not that worried about the other definitions. Are you? No, you don't care.
The population is about 33,441 people, and in regards to racial makeup this is a breakdown from about 2000 (eleven years isn't that long):68% white, 27% Hispanic, 10% mysterious other, 8% Black, 5% Asian. Hold onto your hats for the next statistic because it's a doozy. The median income is $96,532. This is by far the wealthiest area to be featured on Tumble Weave. Kudos Park Slope. Is that weave made by Prada?
Zillow.com provides fun information like 'who lives here?', and then provides a general outline of 'The main types of people who live there'.
1) Power Singles—High-income urban singles.
Highly educated professionals, many with advanced degrees. They draw a handsome salary and have reasonable living expenses while living a hip, upscale life in an urban center.
2)Makin' It Singles—Upper-scale urban singles.
Pre-middle-age to middle-age singles with upper-scale incomes. May or may not own their own home. Most have college educations and are employed in mid-management professions.
3)Multi-lingual Urbanites—Urban dwellers who speak more than one language.
Some have a high school or college education, and they work in a variety of occupations. Moderate to upper-scale earning potential.

Based on my calculations about 92% of people living in Park Slope shop at stores that make hip clothes for babies, dogs, or both.

Interestingly though, during the 1950s, Park Slope saw its decline as a result of suburban sprawl and declining local industries. Many of the wealthy and middle-class families fled for the suburban life and Park Slope became a rougher, more working class neighborhood. It was mostly Italian and Irish in the 1950s and 1960s, though this changed in the 1960s and 1970s as the black and Latino population of the Slope increased and many of the Italian and Irish population began to relocate. Then the hippies and artists showed up and gentrification grabbed hold. The rest is history. 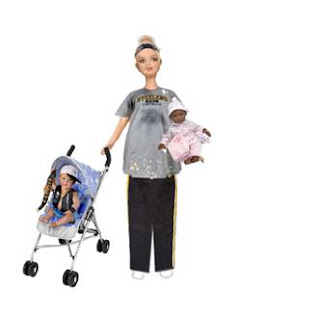 Remember to email tumblingweavenation@gmail.com if you find some weave. Include the location where your found it!

Keep calm and carry on.

Cited Sources (because I went to college):
My own experiences, suckers.
The NY Times
http://en.wikipedia.org/wiki/Park_Slope,_Brooklyn
http://www.zillow.com/local-info/NY-New-York/Park-Slope-people/r_197044/
http://www.dailyslope.com/2007/03/04/park-slope-barbie/
Posted by Dog Days Are Over at 9:24 AM No comments: