In all my days I've never seen someone lose their mustache on the street. A clean, full mustache tossed aside like an unwanted candy wrapper. A few days ago I received an email from a good friend who is currently traveling about on a cruise ship, playing in the band. He spends his free time searching high and low in tropical places for lost hair extensions for me. He failed in that endeavor, but he found me a mustache. Since receiving that email from him, I've woken up every day with thanks in my heart and a smile on my face. 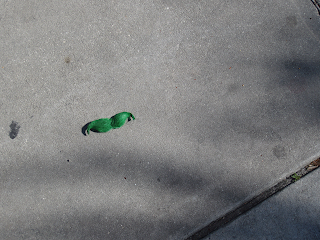 Syke out. It's not a real mustache. This little emerald farce was found in Tampa, FL in the port district. But like this mustache, Tampa's port isn't even the real deal. It ranks second to Miami's port in terms of the number of cruise ships that regularly stink up the coast with boring tourists who will all probably get a flesh eating bacteria. At the least Tampa has the honor of playing host to Wikipedia's server farm and other Wikimedia Foundation projects. What a fabulous place indeed.
Stay with me, dear readers, as I've never reviewed a location based on fake facial hair, only faux follicles found for the head. The mustache is a St. Patrick's day throw back, but Tampa isn't exactly the capital for St. Patty's celebrations. Ok, train of thought. Chuga chuga choo- let's just look at tourism in Tampa, and maybe some stats about St. Patrick's day in general. That's a holiday rife with tradition and stoicism.
After some shoddy internet based research, I gave up after I found visittampabay.com; the most recent statistics they have are from 2010. What are they doing down there that prevents them from providing me updates? Serves them right that their tourism dropped by 7.4% between 2009 to 2010 to a measly 13.9 million people. All they brought in was a paltry 3.2 billion dollars. That's only equal to winning one lottery these days. I did cease my high speed reading and mockery at this though: tourism brought in around 47,384 jobs and $1.3 billion towards wages for those in the service industry. Total cruise passengers at the Port of Tampa reached 845,918 for calendar year 2010, which represented a 6.6% increase over 2009 figures. I'm sure my good pal is glad to be part of that statistic for 2012. International visitors made up 13% of tourists that year, and most of them came from Canada. Not impressed. If you have any questions about those things, feel free to contact Travis Claytor, communications manager for Tampa Bay & Company. His information is listed on the aforementioned site.
Apparently St. Patrick's day in Tampa was like St. Patrick's day in all cities in United States: the law looked the other way while drunk people really tested the limits of public decency while bars served them green beer. They're trying to improve their tourism around the holiday, and it's working ok. I guess. I doubt most people care where they are on St. Patrick's day, as long as you're with people who will protect you from yourself and/ or others. One gem I found was an H&R block office in Apollo Beach offered free reviews all day on March 17th. What exactly prompted the owners to do this, I will never know. Hopefully their offices were respected by responsible persons hoping to get their finances under control. No green puke in the bathrooms or urine on the sides of their building. If this rather nice picture has taught us anything, it's that people cannot let this mustache craze end.